The Third National Trek Rally 2010 was held in the Amana Colonies RV Park and Event Center from June 8-12, 2010.  We had coaches from 33 states and one Canadian province for a final total of 94 coaches in attendance.   There were only five coaches present that were not Treks, and three of those coaches were vendors who signed up for all of the rally activities.  The other two were old-time Trekkers.  It was good to see Bill and Emma Mehard at our rally taking advantage of our Passport option which allowed them to be rally members without an RV.  Emma was one of the models in the style show.  We had 5 people sign up for Passports.

The brightest spot of the week (literally) was when the participants brought their RV site cards that confirmed their reservations to the Rally Registration Desk.  When they presented the site cards they received their Athletic Gold T-shirts with a picture of a zebra created by Dennis Dame of the RV mural fame.  The interesting thing about the picture was that Dennis challenged himself to create a zebra without using either black or white in the picture.  Dennis also sent us the original framed picture for use as a door prize.

The Tuesday evening Official Opening Ceremony was held in the Morton Building where everyone had gathered for the evening meal.  We began with a flag raising ceremony and the pledge to the flag.  Then in keeping with the German heritage of the area, I said grace in German.  Komm, Herr Jesu, sei unser Gast, Und  segne was Du uns bescherest hast.  Amen, which you probably know as Come, Lord Jesus, be our guest.  Let  these gifts to us be blest.  Amen.

The rally badges had a small picture of our zebra in one corner and came with two tickets for the Discovery Trail provided by the Chamber of Commerce of Amana and local merchants in the village.  Special discounts and other incentives were made available by these 13 vendors in their shops.  Any list that starts with the Chocolate Haus cant be all had.  Also on the list were the Millstream Brewery [5,115,216 bottles of beer and soda bottled since 2001], Amana Woolen Mill, Ox Yoke Inn [3 tons is the amount of rhubarb used each year], Ronneburg Restaurant [in the original communal kitchen], Kitchen Sink, Heritage Cheese Shop, Sandstone Winery, Amana Meat Shop & Smokehouse {10,000 pounds is the amount of beef made into jerky each year], Lehm Books, Old Creamery Theatre, Clothes Encounter, and Yanas Boutique. The usual outstand support from all the attendees was fabulous.  Without the cooperation from the 191 people in attendance the entire event would not have met the standard of excellence that was seen by all.  Thank you to all the volunteers.  The Style Show on Friday had eight models from our rally who were as professional as any I have ever seen.  The fashions from the Amana Woolen Mill were not only marvelous but affordable.

Jon Childers from the Amana Colonies held those attending his seminar spellbound on Friday for an hour and a half with his review of the history of Amana presented as Amana Colonies  The Inside Story.  It is a fascinating history of a people who wanted to live a religious life their own way and made communal living a success.

The rally badges were our meal tickets for the fabulous catered meals by Yana from the Ronneburg Restaurant in Amana.  Even the oatmeal for the breakfasts was really good.  The serving of the food followed a new pattern which had 191 people eating in 13 minutes for the first three nights and 11-1/2 minutes on Friday.  And as the days progressed the food just got better.  It started with lasagna on Tuesday, roast beef on Wednesday, smoked pork shop on Thursday and the big finish on Friday was the barbecued ribs.  On Barbecued Ribs Night one of the Trekkers had a very frustrating experience.  Three times he picked up a rib and each time all he had was the bone.  So he gave up and ate with his knife and folk. [Personal note:  After the rally Madeline and I ate lunch at The Ronneburg.  Madeline ordered a hamburger;  it was the best burger she had ever eaten.  And on my budget Madeline has had plenty of practice to make that judgment.]

The ice cream social sponsored by Precision Frame on Thursday had an enhanced selection of flavors.   Each person could select two cups of the ice cream and thus mix or match the five flavors.

Happy Hour followed a different format.  We had a Tasteful Event each evening at 4:00 pm.  These started with a pre-rally Tasteful Event on Monday by the Collectively Iowa winery.  Tuesday the Millstream Brewing Company  the largest micro-brewery in Iowa  brought their selection of beer and bottled soda.  Wednesdays event was provided by the Ackerman Winery.  Thursdays by the Village Winery and Fridays by the Sandstone Winery.  All of these vendors are local to the Amana Colonies.

John and Carolyn McHale worked their magic with the numbers from the coach weighting held upon arrival from Sunday thru Tuesday.  The individual results were made available to all the coaches weighed.  The scales were provided by Michelin and Chad Crystal from Jims Tire Service.  Chad held a seminar on Friday with the topic entitled Know Your Tires.

Other seminars from our vendors were Mary Kay  Anti-Aging Skincare, Mobile RV Medic  Basic RV Electricity Precision Frame  Weights & Safe Driving, SkyMed  SkyMed Takes You Home; Brazels RV Performance  Performance & Braking in Your RV; Ed Spigle with Retro-fitting Your Trek & Upgrades; Carolyn McHale with How to Use the Trektraxs.com Website.  Another vendor was the Custom Coach Connection which some might recognize as the old Moto-Sat.

Crafts were presented by Grace Henderson who provided etching of plates and glasses for the 2010 rally, and Mary Emas who worked her magic with beads and cloth goods.

Each evenings entertainment was presented by a different Trek group.  The comedy evenings were outrageous.

Each night after the evening program a campfire was held at the Woods Pavilion on the rally grounds.  The firewood was scraps from a woodworking shop in the Amana Colony.  If you know your woods, you would have had tears in your eyes as you watched me put into the fire the quality of the wood that these people were throwing away.

All the money for the rally came from the registration fee for the rally.  We had no angels to help us this time.  With Al and Cathy Cooper bringing their Wii bowling game and collection $1.00 for each run at the practice bowling (which climaxed with a set of 91 pins in the alley), and some additional contributions by individuals, the rally was able at the close of the books to donate $300 to the Habitat for Humanity in the Cedar Rapids area.  A pre-rally event to our National Rally was the Habitat Build in the Cedar Rapids area.  So we had Trekkers in the RV park a week early contributing their time and effort to a great cause.

The rally also donated $100 to the Trextrax.com website in order for them to help maintain our very active use of their facility.

At the Official Close of the rally on Friday night, after all the recognitions were made, we had a flag lowering and folding ceremony which included what the folding of the flag means and what all the folds represent.   It is a great country. 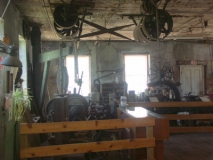 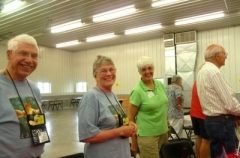 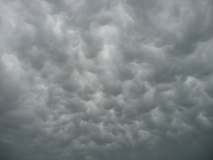 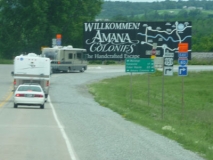 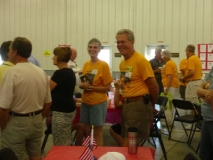 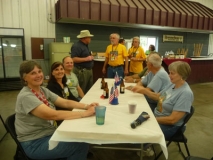 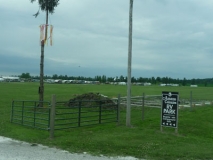 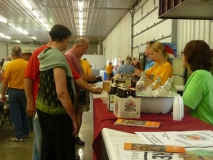 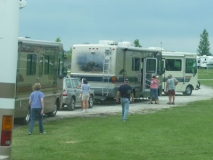 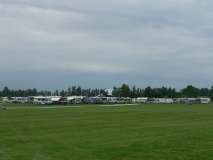 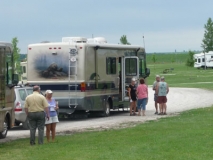 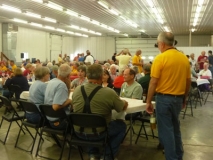