Yakama Nation RV Park at Toppenish, WA (Site of the very first rally for NWTFC IN 2004) was the location for Rally # 1 of 2011. Rally Masters Ben Paschall and Penny Braden arrived on the 16th to get everything set up for us.. The rest of us drifted in on Thursday making sure that we arrived in time for Happy Hour and heavy hors doeuvres. Amazingly enough, we shared experiences and information until after nine PM! Now that is really one heckuva Happy Hour!!

The Bonkowskis were planning on attending their first rally with us, and in fact got as far as Yakima before breaking down & getting towed for service.  They decided to pack up their cat and drive their tow car back home to Bainbridge Island that night  a very long day for them.  Well look forward to seeing them at a later rally.

Friday found us scattered to the four winds. One couple went to Maryhill and Stonehenge, others to Yakima and the museum, and several stayed at the park relaxing and working on the dirty little jobs that seem to be part of being owned by a motor home. Friday night saw us enjoying the camaraderie that is special to TREK owners. Dinner that night had a distinctly Irish Flavor because each of us brought a dish that featured POTATOES! We had gnocchi, colcannon, sweet potato dessert, sweet potato cheese cake, and potato rolls. As we left the lodge, the brightest and largest full moon in years shed its light upon us as we walked or drove back to the coaches.

Saturday morning broke with clear blue skies and a most welcome and warming sun. Like the quail in the stubble next to our sites, we scattered all over the local area! Four or five of us congregated at the Yakima Valley Museum, arguably one of the best I have ever seen in a comparatively small town. Exhibits ranged from samples of a petrified forest, to Native American tools and art, to a collection of over five thousand pairs of womens high-heeled shoes, to the heart-breaking history of the Japanese families who were sent to internment camps during WW II. Farming and other exhibits were also available for exploration. The museum has national certification and is a Must See when visiting the Yakima Valley. There are also some very highly regarded wineries throughout the region, some affiliated with Ste. Michelle, and others making their own world-class impact on the wine industry. Four of us discovered what I consider the best commercial BBQ I have ever eaten. The proprietress, Miz Dee, kept us entertained and well fed, too. Something to remember is that her company has catered events for as few as 12 people to over 2,000!

Sunday was typically Western (Wet Side) Washington weather with cold, driving rain that threatened snow! In fact, two coaches left shortly after noon on Sunday because of predicted snow accumulations over the passes between Toppenish and home. About a half dozen of us braved the wind and cold to explore downtown Toppenish, with its four score murals on buildings throughout the downtown area. We also had a wonderful time exploring several of the local Hispanic bakeries before we were able it locate some special tortillas. That evening we shared the results of the Terrific Toppenish Scavenger hunt and learned why we ought to have items from shovels and collapsible pails to squirt guns and flare pistols as part of our onboard RV supplies. Believe it or not, we enjoyed leftovers from Thursday nights potato extravaganza and everything seemed to be even tastier!

Monday morning found us saying good bye to everyone as we headed off to home or other destinations. The Yakama Nation RV Park is truly a full-service park and holds a special place in the hearts and minds of the TREKIES from NWTFC. 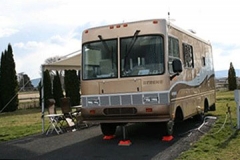 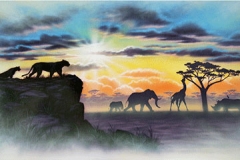 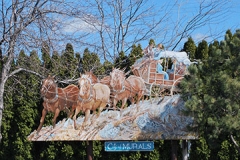