Wagonmasters, Ed & Jeanette Block, chose Grandy Creek Resort (an award-winning, KOA/Thousand Trails campground in Concrete, WA) for this rally — to enjoy the rugged beauty and challenges of the North Cascades  and to celebrate the clubs 5th FMCA Chapter anniversary.  The weather couldnt have been better with warm, sunny days and starry skies for every evening campfire.

Day 1 – By mid-day, all rally coaches had arrived — many couples coming from a memorable NWTFC rally hosted by Stan & Barbara Shackell, in Vancouver, B.C. As dinnertime approached, all gathered for a lawn-chair happy hour. Everyone brought terrific potluck dishes and desserts for an outstanding buffet.  The group had the benefit of a fine kitchen and clubhouse seating, but the warm weather encouraged some to sit in the covered picnic area as well.  Sedro Woolley FDs deputy chief, Todd Olson, & his wife were pleased to join us, prior to his arranged demo of current CPR and defibrillator use.

Day 2 – offered plenty of time for folks to relax or take to the trails of nearby Baker Lake Road.  Twelve couples headed for the Shadow of the Sentinels old-growth forest and the magnificent view of 10,000 Mt. Baker at Boulder Creek Bridge.  The group also hiked to a ‘bouncy’ suspension bridge over crystal clear waters — an opportunity to bring out the little boy in our men.  There was a productive business meeting that afternoon and all enjoyed fine Italian food at a local favorite, Annies Pizza Station.

We decorated the Grandy Creek meeting room with balloons & streamers for the chapter’s 5th anniversary party that followed.  All enjoyed delicious carrot cake, Tillamook ice cream and raspberry sherbet fruit punch.  Nine of the original couples listed on the chapters FMCA charter were present and acknowledged by President, Stan Shackell.  Judy Keppler, our FMCA NW Area President, congratulated the club — presenting Stan with a certificate for the clubs records. We were honored that Judy and husband, Ron, joined in all the rally activities and our celebration.

Day 3 – started out bright & early with a generous Continental breakfast.  Eighteen couples were soon on the road through Americas Alps for a day of adventure.  North Cascades National Parks  Diablo Lake Lookout and Washington Pass Lookout provided memorable vistas to photograph, stretch legs & enjoy picnics.  From there, the group parted. Half continued on to Winthrop for lunch and tourist-pleasing shops along its Western boardwalks.  At the Shafer Museum, we learned of the regions rich history and viewed rooms of well-preserved items depicting life in the early 1900s as well as sheds with buckboards, early automobiles, farm machinery — and mining equipment.  The museum was given a good rally donation as they had opened off-season for us that day.

Others carpooled in 4×4 vehicles to Mazama and on to Harts Pass & 7900 Slate Peak (highest, narrow forest-service road in the state) for a 360 degree view of the North Cascades  but as (poor) luck would have it, 400 from the summit a chilly, marine flow shrouded the mountain tops and our adventurous off-roaders’ view in thick cloud cover.  A fun run nevertheless!

The groups converged later for our tour at the North Cascades Smokejumpers Base.  Jason Ramos, a smokejumper with 20 years with the forest service and five as a jumper, was an excellent guide. With many forest fires being fought, he was the only one at this NW base who wasnt on assignment that day.  He proudly shared the programs amazing 70-year history and daunting expectations of individual jumpers. Requirements are so stringent, only 490 total smokejumpers currently are qualified for this work at 8 such bases nationwide.  They are expected to complete their fire-fighting or rescue task and hike out of the forest with up to 130# in their packs — jumpsuit, chute, equipment & supplies.  Jason explained a jumpers responsibility for making needed clothing & parachute repairs & the re-packing of their chutes.  A video covered their workouts and training with full dome chutes for pinpoint descents from 1500 in steep, rocky and wooded terrain.  Interesting facts regarding the spotters duties were shared as we were aboard the teams airplane. The plane would drop the jumpers fire-fighting gear and life-sustaining food & water from low altitude as accuracy was critical.  Other than this drop, little (if any) assistance is available to these incredibly capable jumpers.  A rally donation was made to their effort and several of our people bought Smokejumper T-shirts.

Some couples stayed for dinner in Winthrop and others stopped for a good meal in Marblemount.  The night skies silhouetted spectacular, mountain peaks on the long drive back to camp. We were grateful to those who had made an inviting campfire to enjoy upon our return.

Day 4 – Remaining breakfast goodies were enjoyed another day, and several of us women created pretty, ribbon-tied, photo albums with Lois Piispanens guidance.  The class continued after the days “Diablo Dam Good Dinner Tour“.  By noon our carpools arrived in Newhalem where we boarded Skagit Tour buses.  The narrow canyon road brought us to Diablo Dam for a spectacular cruise on lovely, glacier-fed Diablo Lake.  Seattle City Lights hydroelectric project (Gorge, Diablo & Ross dams) has long served the city of Seattle.  We had a memorable time aboard the Alice Ross III and our skipper gave Ron & Ginny Rawson a special treat, diverting the boat from its route to see the Cascadian up close!  a boat built by Rons company in 84 to serve SCL tours. A tasty home-style chicken dinner followed in the company-town of Diablo.

The final campfire brought out good stories and jokes from even our newest member, Tom (& Brenda) Walton.  Ed & Jeanette thanked the many who had helped make their rally such a success!  A final 5th hole was punched in each couples QuickDraw Poker envelope.  Discovering three aces in their ‘poker hand’ insert, Rodger & Colleen Wright claimed the $50 cash prize! 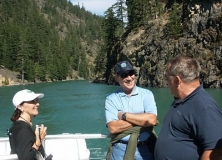 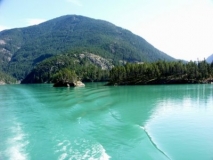 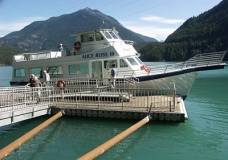 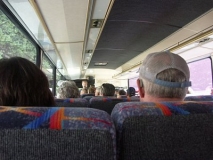 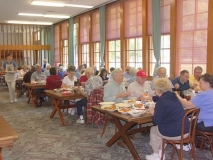 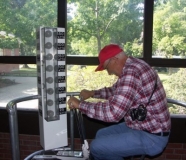 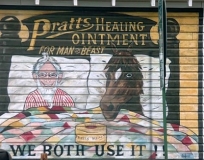