Our chapters responsibilities for the FMCA Prize Booth (and short coach lengths) got us our usual, enviable parking on the blacktop, just a skip and a jump from the dining hall & behind the vendor building.

The *d couples (including *Warrens) did a superb job working their shift at the Prize Booth. . . wearing navy bandanas as volunteers. Hot temps turned to violent weather as the hours passed, but didn’t slow anyone down. We had that one day for prize booth setup, organizing vendor & chapter donations, cutting apart 555 registration slips for our prize drawings, and enjoying a catered volunteer dinner.

The booths crowning touches were a West is Best theme banner created by Judy Schindler, western tablecloths and dozens of bright balloons inflated by the Piispanens (who were careful to keep them from playful Bruiser!) Jeanette gave a quick presentation on the how-tos of giving good stuff away and keeping good records  while Ed worked the problem of locating the second, promised dry-erase board.

Day 1 was a busy one for seminars and shopping : )! Ed had plenty of help bringing in the days 36 prizes from Keeler’s handy, walk-in trailer. Every day included some really special gifts as well as chapter cash and a 2-night stay at Newports Ocean Shores Resort (50 donated!). Collen Wright & Judy Keeler set up a nice Western theme NWTFC display for the Chapter Fair that featured a laptop PowerPoint presentation promoting the club! Rodger and Lee assisted during the event. The Willamette Building seated 1,000 +/- rally-goers for a good catered dinner that evening. . .with some staying even later to play Bingo.

Day 2  Breakfast was the best time to wander in and eat with totally new folks. The Frustrated Maestros chapter entertained including our members Russ & Maxine Warren and Peggy Beers. By 10 am, the prize booth swarmed with folks curious to see if they were among the (56) F-#s chosen for the day. Our clubs donation of trekking poles were among some fine gifts from chapters, vendors and companies. Everyone was pleased with the ice cream social — generous scoops of vanilla ice cream with strawberries  yum! Their volunteers even sought out people who were working and unable to break free for the treat. After that evenings dinner, we were entertained by the amusing juggler/comedian, Barnaby.

Day 3 – After breakfast, our morning shift dealt with remaining door prizes, while others headed for the swap meet, more seminars and show coaches. None of the coaches were Treks, but Guaranty RV sold six during the rally.

Some of the good times at the beer garden included a ‘Wet T-shirt Contest’ befitting an FMCA rally! Ed, Karen & Herb, John Turner and Jane Helminiak participated, hurling a soggy shirt with their strong hand behind their back! Good throws, but not winning distances. The consolation prize for all was a West is Best T-shirt. Parade time found many ready to march. A military color guard led the chapters who were riding stick horses, in Oregon Trail dress, driving chuck wagons, etc. Our one-horse team brought up the tail-end of the parade. Our own Sheriff Don Taylor rode his Sedgeway mount (w/horse head) — holding our parade sign high. Our marchers were Dean & Donna (with their black labs w/red bandanas), Lois & Dick, Jane & Don H., Jeanette, Karen and Stan & Barbara in Western hats.

Back at the ranch, Ed, Gene & Carole were disassembling the prize booth and combining unclaimed gifts for the evenings final give-away. Ed got permission to retain the FMCA items for our chapters 5th anniversary celebration in September.

With the return of good weather, we gathered with lawn chairs at Karen & Herbs Trek for a fine Happy Hour. Don & Marlene Zifka (Ryderwood, WA) and first-timers, were invited to join us. That evenings catered dinner was preceded by many special prize drawings including a $1700 Adventure Caravan tour. Ed awarded the remaining Prize Booth gifts from the stage. Every centerpiece also was a freebie to someone at each table. The seats were hard for a long evening but all gladly stayed for Tommy Overstreets easy-listening, country music.

JUNE 8  The Sunday morning meeting/rally wrap-up was attended by chapter delegates, volunteer chairmen and folks interested in the election of area officers, critical FMCA business and the rallys committee reports.

Some Trekkers were still vacating the parking lot afterwards, so we got in our goodbyes. 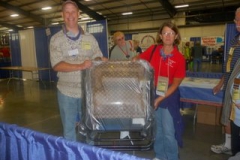 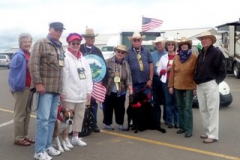 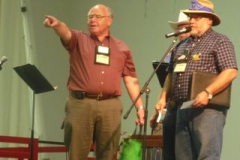 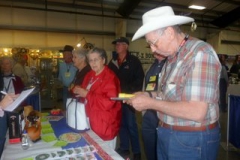 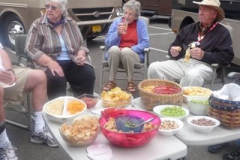 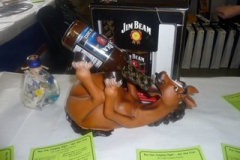 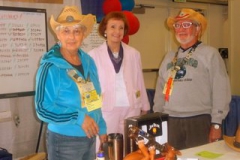 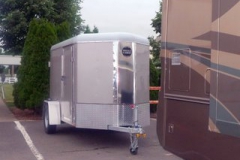 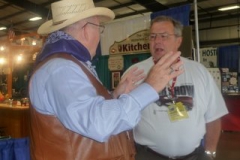 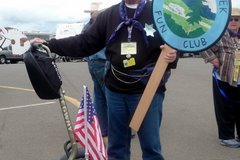 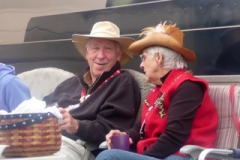 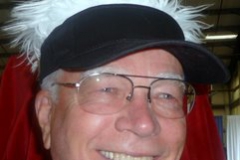 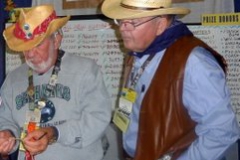 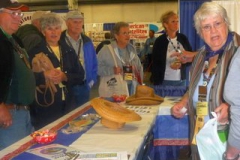 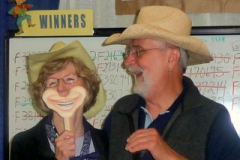 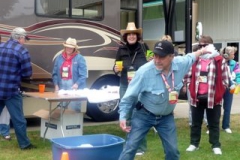 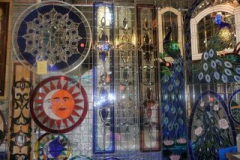 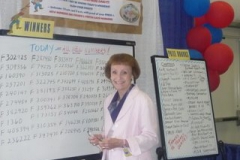