The Trek length and our volunteer signs got us handy & generous parking on blacktop behind the Willamette Bldg.! The fairgrounds showers were at just a short distance too.

At Registration, our nine couples working the Prize Booth were issued sequined Santa hats and red caps. They were fitting for the cool, overcast days! The setup team got our booth looking really fine! The crowning touch was the long red-print banner Judy Schindler had created. A meeting was called in the Vendor area where Jeanette gave a quick Prize Booth 101 presentation to learn the basics of giving good stuff away! Until the rally, meals were always on our own.

June 4 — was a busy one of preparation for many volunteers. Ed & Jeanette accepted, tagged, and cross-referenced donations on a master prize list and chose each days awards so only those gift were brought to the booth daily. The booty requiring secure storage was stowed in Blocks & Turners vehicles. The only club activity that evening was a lawn chair work party to cut up rally attendee FMCA numbers for drawings at the booth Thursday morning. All were careful not to let the wind carry away anyones chances of winning!

JUNE 5  All enjoyed the good variety of breakfast offerings. The Musical Misfits entertained until the Opening Ceremony  a good number attended a 1st timers meeting too. Nancy Harris walked away with one of the $100 NW Area cash awards! The vendor area and prize booth was soon swarming with activity and members checking the Winners Board. 36 rally attendee #s were posted as well as donors names for all the days gifts.

Jeanette & Penny set up our festive chapter table for the Chapter Fair to attract a new member or two. Visitors were attracted to our chapter calling cards, the sleigh of hard candy, and our two photo albums on a table draped in white and green. Jeanette created a Christmas package photo tower for a glitzy centerpiece. The fair was just one hour, but Barb Shackell helped Jeanette field questions. Several Trekkers stopped by including Greg. He suggested that next time we may set up a laptop to display our fine website as well!

An ice cream social followed the fair with scoops of vanilla ice cream and strawberries  yum! The MedEx seminar, among many others, was well attended. Bob Beers & Greg were involved with a seminar re: on-line forums. Eleven gifts went unclaimed during second shift at the booth. The evenings BINGO had some big winners.

JUNE 6 – After another good breakfast to Musical Misfit tunes. 51 new numbers were posted at the Prize Booth and winners kept showing up. Several Trekkers attended the popular Red Hat Luncheon with tree ornaments to exchange, enjoying a delicious lunch. Volunteers continued to work the prize booth with just 5 awards unclaimed and moved into the next days offerings. There was a large turnout for Fire & Life Safety for RVers due to a catastrophic coach fire (Norcold refrig.reported per the recall list) and a heart attack incident. Trekkies got together before dinner at Hollisters rig and a few of us practiced the song for tomorrows parade. Following a fine catered dinner at the Willamette Bldg., a collection was taken to replenish the Albany fire districts emergency fund to the tune of $1300! It was mentioned that Guaranty RV had also generously helped the couple with the use of a coach during the rally! There were several 50/50 drawings (Ed spent $20 and won $50). Entertainment was the music of a talented young woman whose country-singing career was really hitting the big time!

JUNE 7 — (Saturday) Still another team of volunteers opened the prize booth and chose another 51 attendee #s. Jeanette did the Donors board for all remaining gifts and took pics of winners thanking vendors for their gifts. Over the 3 days, a few of our members wre among the lucky winners . . Lee, John, Greg, & Penny! The Swap Meet attracted some of our members while others checked out the new coaches. Ron Mahugh & Mary Burchett were still reeling from trading their 03 for a new 08 RB2 with a new floor plan and the W-chassis. Wow! The dogs will have to be convinced those comfy cockpit chairs aren’t theirs!

Shackells and Gene Nemish took over the final shift, until it was nearly 3 pm when Stan & Barbara suddenly turned into Christmas tree ornaments for the parade and Ed arrived to help Gene dismantle the booth and transfer the remaining gifts to the Rally Master.

The NW Trekkers prepared to march! Kazooists, Ken, Judy and Jeanette joined a few Frustrated Maestros –Russ Warren, with his cornet, and two singers on a tram cart. The melody for Grand-ma Got Run O-ver By A Rein-deer helped our Trek marchers with the tune. Penny was in a long robe, red hat & scarf, and crutches. Peggy organized the group all decked out in red, antlers, silly hats & Christmas frills, but most attention was on Zoe in antlers & Tug in a Santa hat with cute paw ruffles at the reins of NoofMom in her long, fur trimmed Santa apron and hat! John Turner wore a large jokers hat and held our chapter logo parade sign. A couple clubs even had very creative floats!

Soldiers returning from Iraq were just arriving for a special welcome by their families and girlfriends in the nearby lake park! Our FMCA VIPs soon arrived too and motor homes on the far side all sounded their horns as we sang & played. Soldiers met with loving hugs, misty eyes & laughter.

That evenings catered dinner was excellent! 50/50 drawings followed with Ed as a winner of $50 and parade awards best pet costume awarded to Lynnes Newfies of course! Ed & Jeanette were called to the stage to help Santa draw #s for the remaining 13 booth prizes! What fun! Winners came from all across that huge hall seating over 800. The Knox Brothers were so entertaining. Its always a wonder why some folks dont stay to the end — just to get a head start home?

JUNE 8 – Muffins & coffee were provided for those who stayed for the Sunday morning meeting/rally wrap-up. Area & Chapter officers met to vote for new area officers and hear brief committee reports and thank them for their volunteer efforts. There were more special thanks directed to Donzella Leahy, the outgoing NW Area VP. Some Trekkers were still vacating the parking lot afterwards, so we got in our goodbyes. 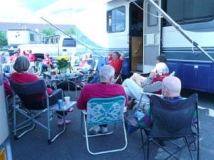 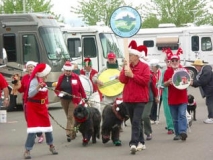 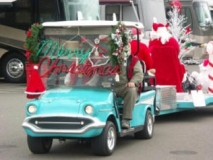 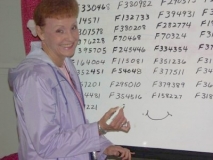 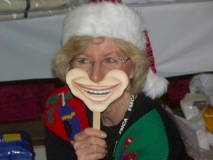 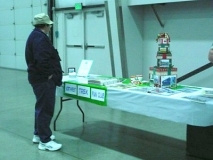 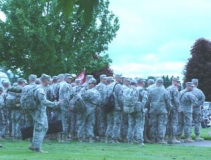 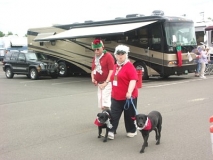 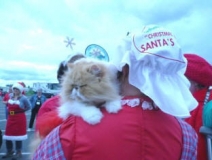 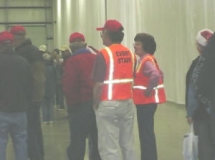 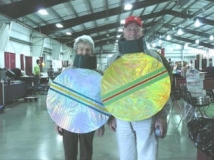 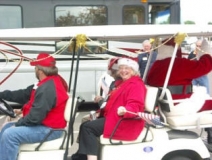 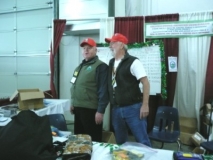 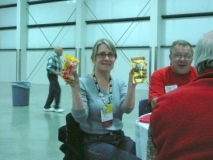 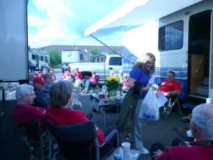 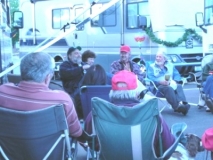 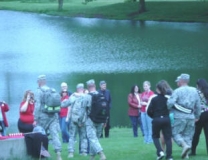 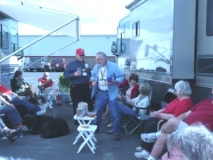 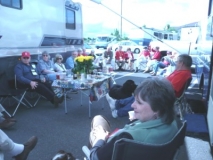 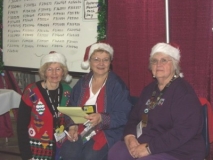