Valley of the Rogue State Park

The consensus was: All treats and no tricks at the recent TREK OR TREAT Rally.

I reflect on the perfect weather we had for those three days. Sunny, warm days and crisp cool mornings and we are grateful that it was dry and sunny for October 8 through the 11th.

Bill and Jackie Johnson volunteered to help with the rally. They went in early & stayed late, a big Thank You!

Mike Apland of Aplands Auto Body, came out during the first Happy Hour and talked about his repair services for owies. He also brought Hagen Daz bars for everyone. Yum!

The first evening we had a delicious pot luck. Good time to catch up with old and new friends.

Robert Henderson did a brief seminar on bicycles & maintenance. He also talked about folding bikes and focused on Bike Friday. We have some knowledge of this brand since we own three and hope to get one of their tandems soon! Then we took a short but wonderful bike ride through the park and to the city of Rogue River.

A tour of Harry & David, then on to Rogue Creamery & Lillie Belle Farms made the afternoon speed by. What fun that was! And educational.

After these excursions, we returned to the park in time for a Dutch oven cooked meal by Silver Ridge outfitters. What a treat! We enjoyed tri-tip and chicken as well as berry cobbler or peach crisp or both! Everyone was a great sport to dress in the Western theme. We voted for our favorite cowboy or cowgirl and newcomer, Mike Mulligan, was the winner just squeaking by Bob Beers! I think it was the 10 gallon hat he wore that cinched the deal.

After dinner, Wrangling Richard entertained us with story and song. He has an amazing voice and one that could definitely be classed as radio material.

Friday dawned much as Thursday with a business meeting following the light breakfast of yogurt, muffins and fruit. Cecil Allen, of Hendersons Line-Up gave a seminar on Maintenance midmorning.

After lunch, Robert Henderson presented his White Knuckles and Windstorms in a Trek seminar. There was good attendance. Then, another bike ride!

We had some door prizes donated by various businesses and we sold tickets and raffled off those prizes along with other donations by club members. I think it was a lot of fun and it generated $294 for the NWTFC.

We had 25 reservations and everyone had a taste of So. Oregon hospitality! 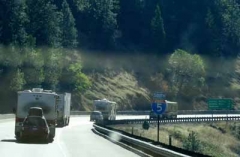 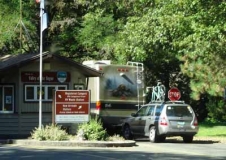 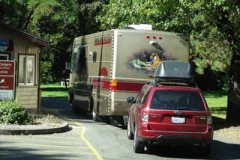 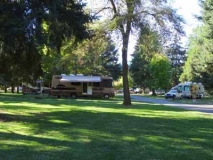 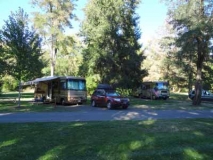 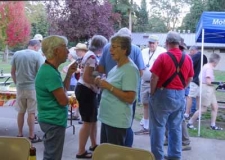 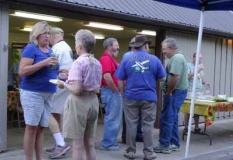 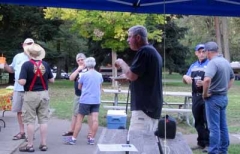 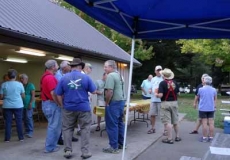 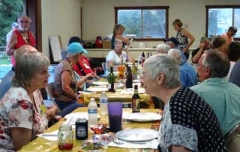 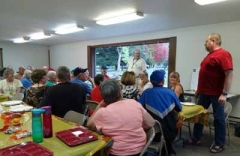 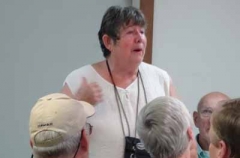